If you’ve taken any Psych 101 classes, the name “Maslow” will probably ring a bell.

Back in the 1950s, his groundbreaking idea shook Psychology:

He pivoted Psychology from studying what’s wrong with humans to focus on what’s right. More importantly, he asked, ‘How do people become better?’ and showed people how. 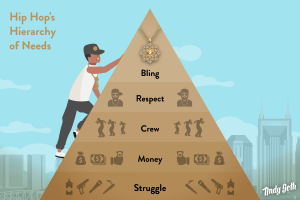 The hierarchy helps people understand where their life falls in the pyramid, so they have a better understanding of how to meet their needs and continuously strive for self-growth. I believe the hierarchy is a fantastic framework to apply not just to individuals, but to entire communities to understand their evolution towards a higher consciousness I call, the High Vibe Tribe.

For instance, hip hop is a great example of an entire culture that moves straight up through the pyramid of needs from the street struggle, to the fame, to the internal fulfillment. Woke artists are no longer all about living in the struggle or stacking chips, they’re all about achieving full potential beyond wealth and prestige.

As more hip hop leaders evolve to meet the top of their hierarchical needs, they’re influencing the next generation to do the same, even if other needs aren’t met. As a result, hip hop is ultimately becoming an art about embracing conscious culture and becoming better people.

Level One — The Struggle

During the disco Studio 54 era, DJ Kool Herc and Coke La Rock were spinning and rhyming over breakbeats to express their struggle living in the hood. As rap continued to grow, everybody in the OG crew had a story about just trying to eat. At this time, hip hop was never a money-making machine. Rapper’s Delight (which was considered “soft”) changed the game by making hip hop a commercial success.

The mainstream brought money and fame to hip hop. Since rappers like Biggie and Pac were no longer trying to survive, they started spitting about their material success. The music became full of bars about C notes, cars, houses, boats, women, and ice. Rappers flaunted their Jesus pieces and women as clout. Money became the king of success.

Beyond benjamins, artists started looking for the next best thing — love. Artists were no longer afraid of appearing soft or damaging street cred. At this point, hip hop music blended with R&B to open up about all kinds of intimate relationships. Bars become less misogynistic and really start to embrace women. Drake writes a lot from this level. His music embraces vulnerability, personal relationships, love, and lust.

Rappers in the game long enough become OGs. The great MCs are well respected because they’re at the top and have a massive impact on hip hop’s evolution. Rappers at this level cement their legacy not just through their platinum records, but by signing the next big artists to their record label. Dr. Dre is a great example where his current reputation is from the artists he discovered, like Snoop, Eminem, 50, and Kendrick.

Despite artists being massively successful, a need for fulfillment drives them to soul search and see the higher power in themselves. They want to make a change but in the words of Kung Fu Kenny, “In order to change the world, [they] must change themselves.” Rappers in this stage are dedicating more time to a lifestyle conducive to self-development like meditating daily, practicing yoga, going vegan, volunteering, and traveling.

Related: The Way We Think About Volunteering Is Dead Wrong

The impact of a whole music genre sitting on the precipice of awakening is tremendous. Consciousness is king now, and it’s sparking a huge resurgence of politically charged lyrics, spiritual rap, health consciousness, and activism. Hip hop is changing the socio-economic status quo by doing dope stuff in their communities. Like starting nonprofits over record labels, building youth centers, donating to public education, and indoctrinating health and wellness into their culture.

More importantly, hip hop is giving its community permission to evolve the hierarchy. Artists are saying, self-realization — bling in your soul — shouldn’t be prioritized last. The hierarchy doesn’t have to be linear because you can survive and thrive at the same time. In fact, ice will never be enough because true happiness comes from internal achievements.

If level five is what the OGs are all going after and you want to join them, then read my book Bling. You’ll understand the fundamental principles of being apart of the consciousness movement that will take you on an internal transformation that will take your life to the next level — no matter where you’re at in the hierarchy of needs.